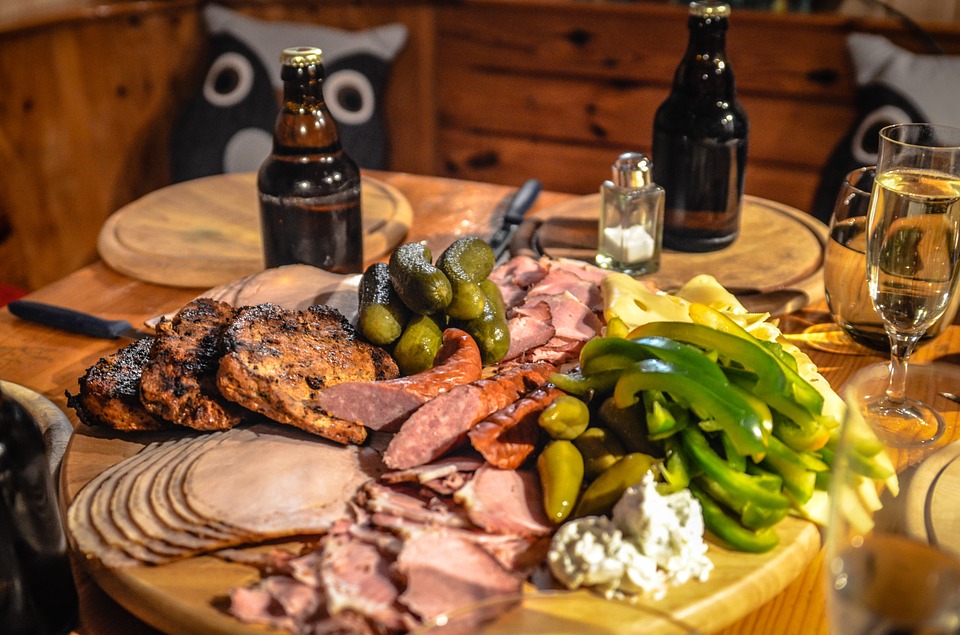 It is crucial to note that God’s first commandments to humans were related to eating. The Hebrew word “command” is used for the first time in Genesis 2:16-17 to reflect God’s headship over creation.

While God gave Adam and Eve dominion over the created order, He still set “boundaries” when He said—the tree of the knowledge of good and evil you shall not eat.

This is a pivotal point. Eve really ate a forbidden fruit. The physical reality of eating something that God has “declared” forbidden is linked to the spiritual reality of disobedience to God.

If this interpretation was strictly to convey a moral point, then why not turn the entire story into an allegorical lesson? Because you and I both know it’s critical to believe in a literal Eden, a literal tree, and a literal fall of man or otherwise the historical-redemptive piece is missing from the Bible.

That being said, God was the first to kill an animal in order to clothe Adam and Eve for the purpose of keeping them warm and more importantly, to demonstrate without the shedding of blood, there is no forgiveness (Heb. 9:22).

It was also Abel’s sacrifice of meat in Genesis 4:4 that was acceptable and pleasing to God, not the fruit of the ground brought by Cain (Gen. 4:3). The main focus was the sacrifice, but that doesn’t mean meat was forbidden in God’s original plan.

I believe God always intended for meat to be eaten, and he would later differentiate between clean/unclean in Noah’s time based on Genesis 7-9.

Regardless of whether meat was eaten or not in the garden, the distinction between clean and unclean animals was still made before the more specific covenantal stipulations with Israel at Sinai.

Thus, dietary restrictions are not embedded in the socio-cultural context of the Isrealites, but is rather a subset of the clean/unclean distinction as a meta-narrative of the entire Bible.

Therefore, when theologians associate circumcision with the dietary restrictions, they are committing the fallacy of false equivalence.

First, circumcision was deeply embedded in the ceremonial law. One could not come to the temple if they weren’t circumcised. It was also a sign of their “distinction” from the pagan nations. But the separation from Pagan nations rationale doesn’t work with the clean/unclean animals.

For instance, W.F. Albright points out in his book, “Yahweh and the Gods of Canaan,” that large and small cattle were more generally sacred, so that it is quite irrational to single out the economically and religiously much less important pig and to explain its prohibition in Israel by its alleged religious significance.”

Additionally, a comparison between Leviticus 11 and Deuteronomy 14 demonstrates that the repetition of the dietary code in Deuteronomy 14 is free from ceremonial or ritual regulations connected to the sanctuary or holy place.

This means an unclean animal is born unclean and dies unclean. As one scholar pointed out, “the type of uncleanness is hereditary, non-cultic, and universal, while the other kind is acquired, temporary, and ritual/ceremonial.” In fact, the dietary regulations were required for the “sojourner” in Leviticus 17:3 through the law of hunting.

Skeptics argue there are no positive evidence existing in the form of commandments or prohibitions prior to the book of Leviticus to support such a standard. First, let me point out that God still punished Cain for murdering his brotherAbel prior to the 10 commandments. Scripture makes it clear that the law of God is written on our hearts (Rom. 2:15).

In fact, God’s invisible attributes are clearly seen in “nature” so that all are without excuse. Secondly, I disagree. If you read Leviticus 11, it is connected theologically with the Exodus from Egypt in terms of motivation for its observation.

Recall that Exodus 20:2 starts with “I am the Lord your God, who brought you out of the land of Egypt,” The same terminology is used in Lev. 11:43 “You shall not defile yourselves with any swarming thing that crawls upon the earth. For I am the Lord who brought you up out of the land of Egypt to be your God; you shall therefore be holy, for I am holy.”

Here cleanness and holiness are linked with redemption from the slavery and bondage in Egypt.

Moreover, God links Leviticus 20:22-26 in connection with the gift of the land. “You shall inherit their land, and I will give it to you to possess, a land flowing with milk and honey. You shall therefore separate the clean beast from the unclean, and the unclean bird from the clean.

You shall not make yourselves “detestable by beat or by bird or anything which the ground crawls, for I have set apart for you to hold unclean…” The appeal to following the laws of the land are connected with future blessing.

Another objection raised was that if one applies the dietary regulations then do they have to apply the entire book of Leviticus? First, the idea of unclean/clean is not limited to the book of Leviticus. Yes, the specific command is, but the motivation and themes are represented throughout the entire Bible, from Genesis 1 to Revelation.

Second, why is it that people hastily jump to the conclusion that the laws in Leviticus are arbitrary? Do you think God would create “revelational” laws in contrast with “rational” laws which man can better understand?

Remember Leviticus also condemned prostitution, bestiality, and other abominations that Christians reject as well. As far as the mold, how do you know whether God was trying to protect his people from infection? If you want to do extensive research, look up D.I Macht, “A Scientific Appreciation of Leviticus 11 and Deuteronomy 14.

The key is really to look at the passages in the New Testament to see if God’s commandments concerning clean/unclean animals have been abolished. First, the Mark 7 passage is mentioned to argue God abolished the old testament dietary law.

According to the text, I agree with the statement that there is nothing outside a man which by going into him can defile him, but the things which come out of a man are what defile him. No one is suggesting the animal itself is what defiles us. Otherwise, God wouldn’t call his entire creation “good.”

Second, when the Jews obeyed God through circumcision, temple worship, honoring the Sabbath, etc, were those “practices” keeping them from being defiled? Of course not. While it was an external sign of their obedience, it was their “faithfulness” to God and desire to be “holy” that was pleasing to God. And our salvation is never found in the law, but in Christ.

At the same time, faith without works is dead. There is no such thing as a disobedient “faith.” Same is true with the Sermon on the Mount. He did not abolish these commands, but rather to show that they all went down to motives, not just external acts.

So when God tells us what is clean/unclean for food, and we disobey that command, then it’s our disobedience that “pollutes the heart.”

Moreover, this passage has been studied in detail by R.T. France. He makes this statement.

“The syntax clearly marks out καθαρίζων πάντα τὰ βρώματα as a parenthetical editorial comment, since there is no masculine singular subject within the reported speech to which it can relate (hence the emendations found in some MSS, representing attempts to ‘correct’ the syntax by those who failed to recognize the nature of the clause…The subject therefore is Jesus (the subject of λέγει, v. 18a), whom Mark thus interprets as ‘cleansing all food’ in the sense of declaring that it is no longer to be regarded as ritually ‘unclean’” (R. T. France, The Gospel of Mark: A Commentary on the Greek Text [NIGTC; Grand Rapids: Eerdmans, 2002], 291; cf. 276).

As I argued beforehand, it’s clear from the passage in Matthew 15:20 that Jesus concludes with why he made the statement: “These are what defile a person (murder, anger, lying, etc); but eating with UNWASHED HANDS does not defile them.

There is no mention of “unclean animals.” Secondly, the Greek word bromata that is used refers to all foods of any kind. If flesh meat was the subject under the discussion, the word for flesh, sarx, or even a reference to animals would be a more appropriate distinctive. If all foods are employed, then even poisonous berries and mushrooms are now okay to eat. I don’t think this was the driving force behind Jesus’s statement here.

Finally, in Acts 10, Peter saw a great sheet let down from heaven with all kinds of animals, birds, and reptiles in it. Peter was instructed to rise, kill, and eat.

Then God says, “What God has cleansed, you must not call common.” The lesson is God was trying to show Peter that Gentile converts were acceptable to God and should be received by the believers. This is evident because Peter was perplexed until Acts 10:28 when he explains what he thought the vision meant: “But God has shown me that I should not call any MAN impure or unclean.” The context is clear Peter was referring to the Gentiles, not food.

The vision also needs to be understood. It does not say the sheet was full of unclean animals. There was a mixture of animals, both clean and unclean. The words used are koinos or common and akathartos or unclean.

The unclean animal is clearly one that God assigned in Leviticus 11. The other kind was a clean animal that had “been contaminated or defiled by contact with an unclean animal.” Moreover, Paul rebukes Peter when he says, “You are a Jew, yet you live like a Gentile and not like a Jew. How is it, then, that you force Gentiles to follow Jewish customs?”

If Peter was accused of being like the Gentiles, it surely wasn’t because he started eating unclean meat. For he said in his vision in Acts 10:14, “I have NEVER eaten anything uncommon or unclean.”

Romans 14:14-17 is another passage where Christians say Pauls point was to tell Gentiles to abstain from consuming unkosher foods since it would offend the “weaker Jewish brother,” not because there is still a creation distinction of clean/unclean.

But Paul defines the weaker brother in verse 2 as one who eats only vegetables. The question was whether meat was acceptable at all since meat was sacrificed to idols. One might accidently consume it without knowing it came from a pagan temple.

In 1 Timothy 4:1-15 the traditional interpretation is Paul condemns the practice of abstaining from certain foods for religious reasons and shows that every creature God made is now clean because they are sanctified by prayer.

When Paul says every, it’s not to be absolute. For example, in Genesis 1:29 God told Adam to eat every tree and plant, but we know in Genesis 2:16 that the tree of knowledge was off limits. The meaning of this passage is every creature God made for “food” is to be received with Thanksgiving because it is sanctified by God’s word through his law (Lev 14/Deut 14).

In conclusion, God always has a purpose for his laws. They are not arbitrary. They are for our good. Marriage is for our good. The Sabbath is a day of rest since humans need breaks. Eating clean animals helps nourish our bodies. These laws are to protect us from harm.

Above all, God wants us to obey these laws to keep us healthy and demonstrate our “faith” by our works. Our works don’t save us, they only reveal our trust and commitment to the only one who can save us, Jesus Christ

4 thoughts on “Did God Change His Mind About Dietary Laws?”