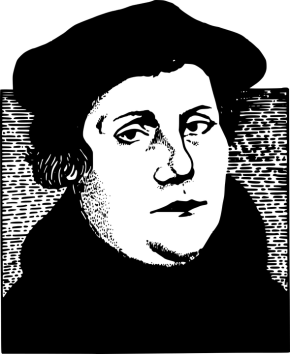 If you follow my posts, you are aware that I have been focusing much of my attention on the negative aspects of the Protestant Reformation. At times, it may seem cumbersome, but the point I want to get across, especially to many of my friends and colleagues who are celebrating the Reformation, is to think critically about the theology you have adopted.

It is my sincere desire and goal that the quotes I shed light upon from Luther and Calvin don’t attack the integrity of the person, but the “principalities and powers” of any theology that would oppose Christ and His infallible Word. And my intention is to have these conversations, not diatribes, with grace and humility. With that said, here is a quote from Martin Luther and his sharp criticism of the book of James.

“We should throw the epistle of James out of this school [i.e. Wittenburg], for it doesn’t amount to much. It contains not a syllable about Christ. Not once does it mention Christ, except at the beginning. I maintain that some Jew wrote it who probably heard about Christian people but never encountered any. Since he heard that Christians place great weight on faith in Christ, he thought, ‘Wait a moment! I’ll oppose them and urge works alone.’ This he did. (Luther’s Works 54, 424).

First, this statement is problematic. I am not the only one who agrees. John Piper writes an open rebuke to Martin Luther’s interpretation of James on his website desiring God.

He states: “Perhaps you’d quickly recant your unnuanced statement without my trying to make any case for it, but if it would help to display some data, here’s my modest attempt. To focus my claim, let me say it is emphatically not the case that James “has nothing of the nature of the gospel about it.”

But the reason Martin Luther had a disdain for the book of James was not because of the apostle James. Rather, it was Luther’s incorrect interpretation of the Apostle Paul’s writings that led him to an antinomian spirit, especially his commentary on the book of Galatians.

Here is a direct quote from Martin Luther on his interpretation of what “weak and elementary principles of this world” meant in Galatians 4:3.

“As such times we are to believe in Christ as if there were no Law or sin anywhere, but only Christ. We ought to say to the Law: “Mister Law, I do not get you. You stutter so much. I don’t think that you have anything to say to me.”

Luther further adds: “The Law is of no comfort to a stricken conscience. Therefore it should not be allowed to rule in our conscience, particularly in view of the fact that Christ paid so great a price to deliver the conscience from the tyranny of the Law. Let us understand that the Law and Christ are impossible bedfellows.”- Martin Luther

Now, let’s read what Galatians 4:9 says. “Formerly, when you did not know God, you were slaves to those who by nature are not gods. But now that you know God–or rather are known by God–how is it that you are turning back to those weak and miserable forces? Do you wish to be enslaved by them all over again?”

Who is Paul addressing? The Pagan Gentiles. When were they slaves? When they worshiped false gods. This is addressed to Gentiles, not Jews. Therefore, Paul is not calling God’s Law bondage. Rather, he is calling their former pagan gods bondage.

In conclusion, Martin Luther spoke unfavorably towards the book of James, not because it established the necessity of works “You see that a person is considered righteous by what they do and not by faith alone (James 2:24), but because Martin Luther had an incorrect understanding of the Apostle Paul.