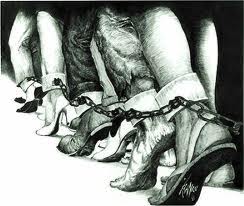 Dr. Kaiser, an Old Testament scholar from Brandeis University writes: “What many fail to understand is that slavery in biblical times was very different from the slavery that was practiced in the past few centuries in many parts of the world. The slavery in the Bible was not based exclusively on race. People were not enslaved because of their nationality or the color of their skin. In Bible times, slavery was based more on economics; it was a matter of social status. People sold themselves as slaves when they could not pay their debts or provide for their families. In New Testament times, sometimes doctors, lawyers, and even politicians were slaves of someone else. Some people actually chose to be slaves so as to have all their needs provided for by their masters.”

If the type of slavery that happened in Africa in the 19th century was in the Bible, the Mosaic Law would sentence that person to death. Exodus 21:16 reads: “Anyone who kidnaps another and either sells him or still has him when he is caught must be put to death.” Africans were rounded up by slave-hunters, who sold them to slave-traders, who brought them to the New World to work on plantations and farms. This practice is abhorrent to God and they would have been put to death for it. Contrary to popular belief, God did not condone slavery in the Bible.

The inevitable question might arise: If God is all-powerful, why didn’t he stop slavery from happening? The purpose of the Bible is to point the way to salvation, not to reform society. Jesus said my kingdom is not of this world. If it were, my men would fight. The Bible often approaches issues from the inside out. Once a person experiences God’s gift of salvation and freedom, He or she will realize that enslaving another human being is wrong.

2 thoughts on “What does the Bible say about Slavery?”